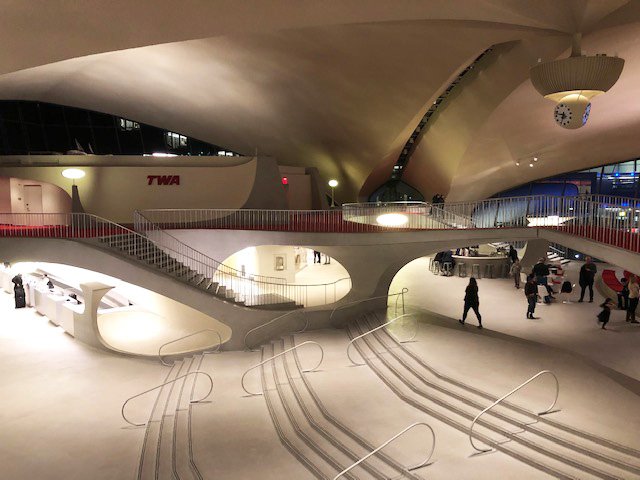 Iconic architecture symbolizes both the past and our future. One such monument to midcentury construction is the TWA Hotel at JFK International Airport. This New York airport hotel is erected around the original flight center terminal designed by architect Eero Saarinen in 1962.

TWA went out of business in 2001, and the terminal laid dormant since that time. Tyler Morse, chief executive of MCR/Morse Development and its partner Jet Blue Airways, located just behind the hotel, remodeled the terminal and built the airport hotel. The hotel has 512 rooms, the Paris Café, a John Georges restaurant, and a pool, but it is the stream-lined architecture and retro interior finishings that grabs you.

When I was in New York, now almost a year ago, a girlfriend, Jane Kettlewell, wine PR extraordinaire, and I had lunch at the TWA hotel just before my return to Los Angeles. Since that time, Jane and her husband stayed at the hotel for a weekend getaway. This article will be through the eyes of both Jane and myself. As I did not see the hotel guest rooms and amenities in the new additions, I will look at it from Jane’s perspective.

Being an architecture buff, I loved the clean, smooth lines of the original building’s architecture. Keeping with the times, every detail in the hotel is retro to the age of flying when Howard Hughes originally had the hotel developed. If you love mid-century architecture and design, you must visit the hotel. For right now, enjoy the pictorial view via this article.

Walking into the lobby, you are taken back to an era long gone, a time when I was in elementary school, a time before we landed on the moon. To help you get into the time warp, hotel staff dressed in original flight attendant garb greet you. The bright red and white colors of the decorations sweep you back immediately. You enter the lobby wanting to catch every detail because attention to detail is unsurpassed.

From period pay phones to a room decorated as a twister game, to the display of flight attendant uniforms designed by some of our top designers. These including Stan Herman, Valentino, Oleg Cassini, and Howard Greer, Pierre Balmain, and Ralph Lauren, to name a few. Today Stan Herman designed new uniforms for the staff at the hotel. They are period clothing yet have a modern and trendy flair.

The hotel offers a rooftop infinity type pool. At night and during the winter months, the pool becomes what the hotel calls a “Pool-Cuzzi” because, during cool weather, its temperature can be raised 95 degrees. The steam floating off the water signals it must warm enough to enjoy a dip.

Museum exhibits curated by the New-York Historical Society celebrate TWA’s history. Exhibits are presented throughout the hotel, and MCR/Morse development collected over 2000 TWA memorabilia obtained mostly from former TWA employees or their families.

Future exhibits will spotlight the jet age and the midcentury design movement making the TWA hotel a cultural stop on any trip to New York City.

TWA Hotel is a dog-friendly hotel. Pets can stay for $25 per pet with each stay.

Restaurateur John Georges oversees the Paris Café and the Lisbon Lounge. The restaurant serves Breakfast, Lunch, and Dinner. The Lounge, besides having a full bar, also serves breakfast, lunch, and dinner.

On this occasion, I opted for a salmon Salad while Jane enjoyed a fish and chips meal with a Quinoa Salad. The food was tasty.

Find locally-made quick foods to either take out or sit at a table in the hall and enjoy.

The Chicago-based roaster is the hotel’s coffee of choice. This coffee is offered throughout the various lounges and dining areas and their location near the front desk.

The Sunken Lounge is reminiscent of the waiting Lounge that would have been at the terminal where you waited for your plane to take off. Lookout from the Lounge to see the restored Connie. Even the drinks’ swivel sticks are replicas of those used to serve drinks in-flight, and each one highlights destinations where TWA flew.

Step back to 1958, when the Lockheed constellation had its hay day. Howard Hughes commissioned it in 1939 but by 1946 broke the transcontinental speed record. It served as Air Force One for Eisenhower in the 1950s. It was Eisenhower that coined the name, Connie. He called Air Force one the Connie. From the original concept came the Starliner L-1649A, which was introduced in 1956. In 1958 the Connie you see today came off the Lockheed’s Line.

After Connie retired, she moved around the country from Seattle to Arizona. At one point, she was used in South America to airdrop Marijuana. Upon her return to New York, she received a grand reception. After restoration, Connie has finally come home to rest at the TWA Hotel, becoming the Connie Cocktail Lounge.

At this time, the Paris Restaurant, Connie Cocktail Lounge, Intelligentsia Coffee, Retail Shops, and the pool are closed.

Take Out food is available from the Sunken Lounge, the Runway Chalet, and the Food Hall.

The hotel is taking cleaning and sanitizing very seriously. Check out the hotel’s COVID policies regarding health, safety, and cleaning.

For architecture buffs, midcentury design lovers, jet setters, or even if you have an extra night to spare, experiencing the TWA Hotel is worth a stay. I know I will be back because as a child of the sixties, it is fun to take a retro journey into the bright, vibrant colors, immersing in the era of the age of flying.