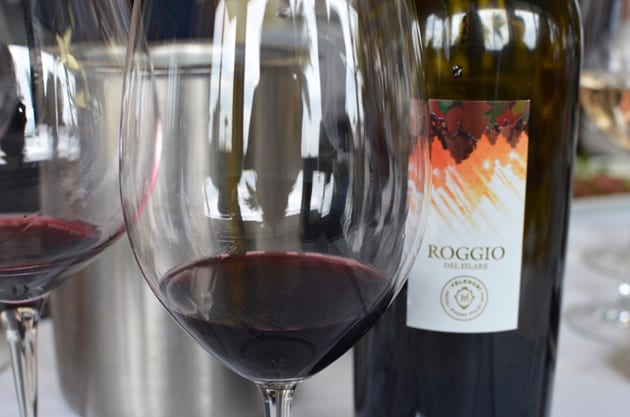 Angela Velenosi was ahead of her time when she opened the Velenosi Winery in the Marche, an Italian wine region lying along the Adriatic coast. Her winemaking vision helped put Marche on the map as a viable wine producing area.

The Italian wine region of Marche lies between the Apennine Mountains and the Adriatic Sea. Its diverse terroir, composed of calcareous and limestone soil and climate that ranges from Mediterranean maritime near the Adriatic in the Southern part to continental in the northern portion also makes Marche a unique place to produce wine.

Although Marche lacks the notoriety as some of its neighboring Italian wine regions such as Tuscany, Umbria, and Emilia-Romagna, it produces some incredible wines that empower the influence of this hidden gem of a region. Marche is known for its white wines especially those made with the Verdicchio grape. However, in reds, Montepulciano reigns as its most popular red variety.

Established in 1984, Velenosi began with two wines and 9 hectares of vineyards. Today, the winery produces 34 wines and owns 148 hectares.

Angela is an entrepreneur because she took the challenge and began the first woman to start a winery in Italy in the 1980s. Her passion for wine and her tenacity serves her well. Today, Velenosi is considered one of the largest family-owned wineries in Marche. As Angela states “ passion was in her blood.” The evidence shows in her achievements with the winery.

In the 1980s, the Italian government engaged young people to move from the cities to the countryside by financing agricultural projects including those pertaining to the wine industry. Consequently, Angela took advantage of this offer to start Velenosi.

Angela presented her wines at an LA Wine Writers luncheon held at Café Del Rey. As a result, the group’s writers sample the wines of Velenosi paired excellently to an extraordinary cuisine prepared by Chef David Vilchez.

Our first wine, Pecorino represents an indigenous grape named after a type of cheese produced in the Offida region of Marche. The wine ferments and ages in stainless steel for three months on the lees, which gives the wine its creamy qualities. With briny and salty influences from the sea, the wine displays flavors of lemon and honey.

Verdicchio is the most famous grape and wine in Marche. Compared to the Pecorino, the wine exhibits more acidity and minerality. One finds briny flavors of lemon and lime with subtle spice on the finish.

Lacrima, another indigenous variety, whose name means tears because this thin-skinned grape breaks easily. The varietal is considered the red version of Gewurztraminer. I sampled this wine chilled, which makes it a good summer drinking red. In fact, I liked Lacrima better chilled than at room temperature.

This wine features my favorite label because it carries Velenosi’s version of Matisse’s painting, the Dance. The wine inside the bottle dances like the figures on the outside. Ludi in Italian means game and producing this wine was a game of chance that proved successful. Combining Montepulciano, Cabernet Sauvignon, and Merlot, one discovers a very classic wine. The Montepulciano comes from a higher elevation; therefore the varietal’s character comes across almost like Malbec. Each varietal vinifies separately and then ages 22 -24 months.

This wine combines Montepulciano with Sangiovese to create a very full-bodied wine with velvety textures and flavors of dark fruits.

This unique sparkling wine ferments three times.  Fifty percent of the grapes ferment like most red wines. Another 50% are dried and then fermented. Later, the two parts come together to ferment a third time in an autoclave for 9 – 10 months. The wine can be considered a dessert wine depending on whether it is the sweet or dry version. I sampled the dry version and found the wine remarkably stellar with its red fruit flavors.

After tasting the various wines from Velenosi, I am extremely impressed with the distinctive quality of this lesser-known Italian wine region. The success of Velenosi and Marche only shows the tenacity and passion a woman like Angela has infused into the winery and every bottle of wine she produces.