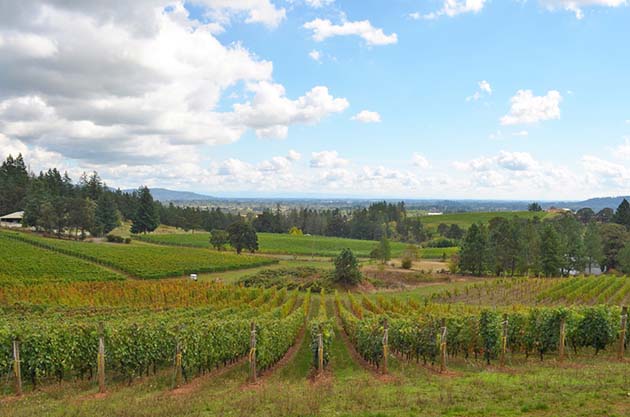 From space to the vineyard, life has taken many spins around this earth for Don Hagge of Vidon Vineyard. Visiting his hideaway gem of a vineyard with its magnificent views of the Willamette Valley, one would never know that Don had played a specific role in the Apollo space mission.

You might call Don an entrepreneur. He grew up on a farm in North Dakota. He was a naval aviator during the Korean War. After his stint in the Navy, he attended UC Berkeley with the intention of becoming an engineer but soon switched to physics. He moved to France while he completed his post-graduate work in physics and of course, discovered wine. Soon after, Don started working for Nasa and the Goddard Space Flight Center, where he became the chief of the physics branch at the Manned Space flight center and the Apollo program. He worked on the Apollo 7 through Apollo 13 space missions. Later he moved to the Silicon Valley, founding several high tech companies.

Upon retirement, Don needed a new project, so, at age 69, he and his wife, Vicki, moved back to the Willamette Valley and in 1999, founded Vidon Vineyard in the Chehalem Mountains AVA. The name Vidon stands for Vicki and Don.  Always yearning for a new project; Don could not let his physics and engineering background go dormant. He decided he wanted to use glass stoppers for his wine so developed/invented his bottling line for these glass tops. Don stepped down as Vidon’s winemaker in 2017 to concentrate on marketing and sales.

The winery is Live certified and Salmon Safe. All the grapes for Don’s wines come from his estate. These grapes include Pinot Noir, Chardonnay, Viognier, Syrah, and Tempranillo are planted on approximately 20 acres. Since Pinot is Don’s flagship wine, three Pinot Noir clones yield grapes on the estate, clones 777, 115 and Pommard. One might not expect a vineyard in the Willamette Valley to grow Syrah or Tempranillo, but Don has planted these varieties on the south to south-east slopes of his vineyard. This warmer section with rocky, shallow soil grows grapes ideal for cool-climate Syrah and Tempranillo.

Don’s approach to winemaking takes a minimalist approach, letting the grapes speak for themselves. The property has three distinct types of soil, Jory, Nekia, and Willakenzie. The combination of volcanic and marine sediment soils assists the grapes in expressing the various locations of Vidon’s estate. Together they round out the unique qualities of the Vidon portfolio.

Today, Dr. David Bellows is the winemaker. Like Don, he has an extensive scientific background and a Ph.D. in Molecular Biology from Johns Hopkins School of Medicine. He also had begun his career in the restaurant business, managing the beverage program for the Aurora Grille in New York City. It was his postdoctoral studies that brought him to the wine scene with the study of wine yeast. His research and teaching took him to New Zealand and Australia. When he is not playing winemaker, he is teaching at the community college wine program.

I have tasted the Vidon wine on several occasions, one being at an LA Wine Writers luncheon at the Napa Valley Grille in Los Angeles and another at the winery tasting room. Being at the winery, you can see Don’s love of the land as he juts around on his tractor to make sure you have samples of grapes. On that day, it was the Tempranillo grapes. At the same time, you find a glow in his eyes that tells you he is at home with his wines.

Vidon wine consists of two labels, the estate label, and the Space Exploration Series. The latter pays tribute to Don’s days at NASA and the innovative times of the 1960s and 1970s when the United States took great steps and a leap of fate to get a man to the moon.

Apollo Chardonnay: Celebrating the Apollo Manned Moon Program, this Chardonnay has flavors of citrus and apples accented by some spice on the finish.

Saturn Syrah: This wine pays tribute to the rockets that lifted the Apollo spacecraft into space. This cool-climate Syrah has a touch of Viognier added and delivers a wine with dark fruit and pepper.

Explorer Tempranillo: The wine is named for the Explorer Satellite program, where Don designed instruments. Like Don, the innovator in the space program, the Tempranillo is a rarity in the Willamette Valley. With notes of cherry and leather, this Tempranillo is a winner.

Estate Chardonnay: Find a big rounded Chardonnay with notes of both apple, pear, and lemon.

Pinot Gris: It is to bad this wine is being discontinued.  It is a bright and refreshing wine. The last vintage available is the 2016.

Pinot Blanc: Find a soft texture that is bright with flavors of Pear.

Viognier:  A lovely crisp wine with nice acidity with flavors of honeysuckle and pear.

3-Clones Pinot Noir: This Pinot Noir represents the three clones that grow on the Vidon property, 115, 777, and Pommard. Each year the portions of each are about equal. I found a light yet nicely balanced Pinot Noir with flavors of cherry and pomegranate. Aging consists of 30% going into new oak.

Mirabelle Clone 115 Pinot Noir: One of my favorites from Vidon, this Pinot Noir reveals a lively wine that is bright with nice body and flavors of Cherry.

Brigita Clone 777 Pinot Noir: This wine is livelier and bigger than the Mirabelle. It exhibits tarter flavors of strawberry.

Hans Clone Pommard Pinot Noir: This Pinot came across as the most masculine of the Pinot Noirs. I found flavors of strawberry.

Tasting the Vidon wines gives one a sense of the science and passion that goes into creating each wine.

Discover the wines of Vidon with a visit to their tasting room: