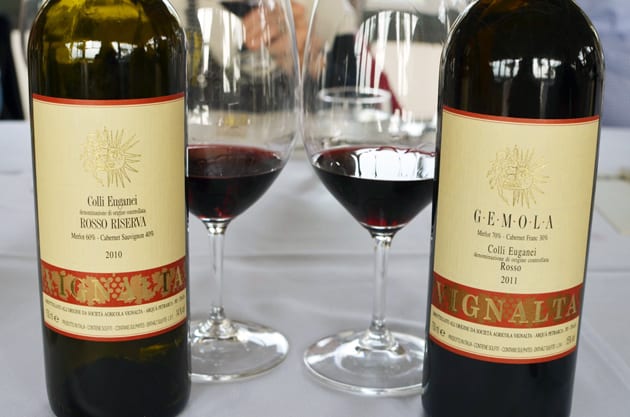 For most visiting a winery, being in the environment is the best way to discover what a particular winery is all about, especially those in Europe. This was not the case with Vignalta. Last May I had the opportunity to visit the Colli Euganei region. This trip included a visit to Vignalta. I enjoyed seeing in person this winery and its vineyards but because I was traveling with a large group of media our visit included exposure to wines from various wineries in the region.   I, therefore, did not get to really explore in depth the wines that Vignalta produces in an intimate setting.

During my European visit I learned that Vignalta owner, Lucio Gomiero lived in San Diego.  I decided the ideal way to further explore these wines was by featuring this winery at a wine tasting event at Café Del Rey with LA Wine Writers. This opportunity allowed fellow wine writers and myself to discover the exceptional wines that Vignalta produces.

The history of Colli Euganei is very important to understanding why Vignalta’s wine is so special. The region is known for its volcanic hills that surround the area. Colli means hills in Italian and Euganei were the ancient people who inhabited this district. Also known as the Venetian Hills, the area came into being as the result of seismic shifts of rocks and substrata that eventually formed both rounded hills and conical ones. The conical-shaped hills resulted from volcanic eruptions where lava escaped from the seabed while the rounded hills were created where the magna stayed inside the mound but raised the seabed. Both formations are critical to the diversity of the Colli Euganei terroir.

The appellation was established in 1969 as a DOC and is one of the oldest in the Veneto region. In 2010 a separate DOCG was established known as Fior d’Arancio Colli Euganei. The area is known for the following varietals; Garganega, Prosecco, Tocai Friulano, Pinot Bianco, Chardonnay, Moscato are the primary white grapes and Merlot, Cabernet Franc, Cabernet Sauvignon, Carménère and Raboso make up the prime red varietals.

Vignalta is considered one of the largest wine producers in Colli Euganei. Established in 1980 by Lucio Gomiero. Lucio studied to be an architect and after graduating college he began working at the family construction business. It was here that he developed a friendship that brought him into the business of exporting Radicchio. Lucio became one of the biggest growers of Radicchio worldwide. One may call him the Radicchio king but Lucio had a passion for wine and started his winery as a hobby. Little did he know that his winery would win some very prestigious awards soon after.

Today Vignalta consists of 55 hectares of vineyards throughout the Colli Euganei region. Most of those vineyards are south facing. These vineyards are primarily planted with Moscato, Pinot Bianco, Manzoni, Chardonnay, Merlot, Cabernet Sauvignon, Sangiovese, Cabernet Franc, and Pinot Nero. Unique to Vignalta is the expansive cellar that is carved into the rock.

We began our meal with a non-vintage Brut called “Nature”. This bone dry brut is created in the Methode Champenoise style. It is produced with an indigenous red grape known as Friularo, also called Raboso.   This sparkling wine is fragrant with wonderful florals and is very fresh on the palate.

For our first course, Café Del Rey Chef David Vilchez did something a little different. With a Blue Cheese Polenta, Balsamic onions, and arugula, the chef had us sample the Colli Euganei Fior d’Arancio Sparkling Orange Muscat 2015. This was a sweeter wine that went perfectly with this dish. To me, this is a springy summery wine. It is the perfect wine for a wedding. Fior d’Arancio means orange flowers and the wine exudes aromas of orange blossoms and flavors of citrus, especially oranges.

Our third course features the Colli Euganei Rosso Riserva 2010, a wine combining Merlot and Cabernet.   This to our chef made an interesting pairing with Quattro Pepe Tonno Hamachi with Pomegranate Reduction. As tuna is considered one of the beefiest of fish this red wine worked exceptionally well.

Next, we had a Calamari paired with Vignalta’s flagship wine Gemola. This 2011 combines mostly Merlot with Cabernet Franc. Gemola signifies one of the hills in Colli that Lucio feels produces better quality wine due to its decomposed lava.   This is a well-integrated wine and displays flavors of cherry and white pepper.

We finished our meal with Pumpkin Biscotti, Chantilly and Berries. This course paired with the 2013 Alpianae. This Passito is made with orange Muscat. This dessert wine is one of my favorite Passitos as it delivers flavors of apricot and is not overly sweet. As Lucio states, “This is my baby.”

Before writing this article I attended the Gambero Rosso’s Tre Bicchieri. At this event, I had the opportunity to sample the 2004 Colli Euganei Rosso Gemola, which was a retrospective Tre Bicchieri wine. The wine was bright considering its age, a 13-year-old wine that still is holding exceptionally. The wine is rich in flavors and body.

The portfolio of wines from Vignalta are extremely consistent and are marvelous examples of the quality of wine produced in Colli Euganei.  They are well worth exploring. The wines might even entice you to take a trip to Italy and visit Colli Euganei and the Venetian Hills.