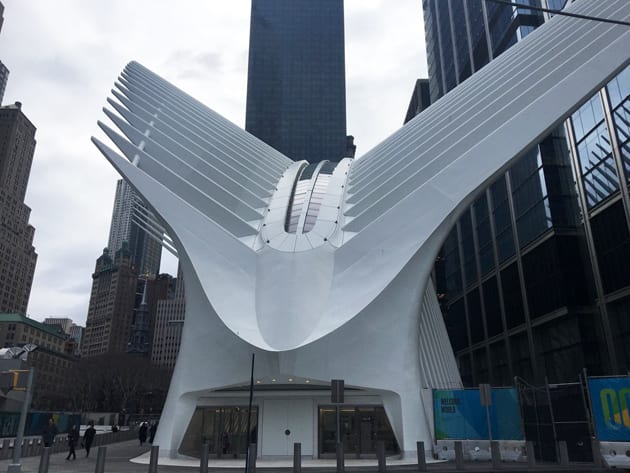 Visiting New York City a person can never say that it is boring. Between sightseeing, nightlife, theater, and dining the day is very full. The frenetic energy of the city draws you in. It is a town that seems to never go to sleep. I recently went to New York for the International Media Marketplace and the New York Times Travel Show, but I cannot visit without taking in some of the sites.

I started my day visiting New York City at the 911 Museum. After my tour of the site, I could write an entire article on this museum. If time allows, try and cover the museum over a two-day period. The emotional impact you feel can be overwhelming, and I know I had the urge to escape during part of the self-guided tour that includes the history of attempts to bomb the World Trade Center.

The grounds are beautiful as is the design of the museum. Except for the Oculus, one is surrounded by a tranquil and serene yet somber setting.

I looked at the memorial, a large pool with all the names of those who perished in that tragic event and melancholy came over me. The way the pool is designed the water flows into a deeper hole, which represents the hole that we created in our hearts on that day. It is like an abyss that consumes us, making sure we remember what happened on that day.

The museum’s design leads you down into what were the lower levels underneath the World Trade Center buildings. Showing the immensity of the structure, one finds the original wall built to separate the building from the Hudson River. One also discovers many remnants of the original building. Seeing the metal framing twisted by the impact and brutal force of those planes hitting the building sent a chill down my spin. We all saw the antennae that stood atop the north tower, but until you are nearby, you do not realize the immensity of the antennae., which formerly adorned the Empire State Building. The last pillar to be removed from the site is one that commemorates those first responders to the emergency and lost their lives saving others.

Inside there is a beautiful tribute to those that died. The Artist, Spencer Finch, created a wall of watercolor mosaic squares, each one a different blue hue representing each casualty. These tiles surround the words from Virgil, “No Day Shall Erase You From The Memory of Time.”

As somber as the museum and memorial presence, the Oculus is the total opposite except for its exterior design. This white purist structure reminds me of the exterior of the tail of an airplane. Inside features modern lines that emphasize the newness of this building. The building serves as the end of the line subway terminal and upscale shopping mall.

Moving on to a more positive note, one must visit the Metropolitan Museum of Art. The museum is one of this country’s largest and most extensive art museums. The museum was established in 1870 as a museum to bring art and art education to the Americans. Railroad executive, John Taylor Johnston’s personal art collection started what has become a very diverse and noteworthy collection of art. The artist, Eastman Johnson was one of the co-founders of the museum. In 1874, architect Richard Morris Hunt created the Victorian Gothic style building that resides in its current location. Over the years there have been many additions including the iconic Beaux-arts façade that we have come to know today.

I enjoyed seeing two exhibits at the Fifth Avenue location, the David Hockney and the Michelangelo exhibits. The Hockney showcases the colorful works of the artist. The show features works of art from the 1960’s to present and covers a range of style that incorporates modern art, cubism and pop art. Hockney’s art epitomizes the California lifestyle especially that of Los Angeles.

The other exhibit, Michelangelo Divine Draftsman and Designer features a variety of detailed sketches and drawings along with sculptures and several oil paintings.

A short distance away at the Met Breuer (formerly the Whitney Museum of American Art) is the Edward Munch exhibit called Between the Clock and the Bed. Munch is most noted for his artwork called “The Scream.” But this show features many self-portraits of the artist. His depiction of human anxiety is quite apparent in the works. You feel the torment of the artist through his brush strokes.

Currently, the Downton Abbey Exhibit is in New York through April 2nd. This display is a must-see for all fans of the series. You are welcomed in by Carson and get to observe many of the stage sets and costumes worn by the actors. The wardrobe takes you through the various eras depicted on the show. My favorites were the 1920s dresses. I became immersed in one of my favorite series as I strolled through the exhibit. One even gets the chance to apply for service at Downton.

I became Mrs. Patmore, although those who know me personally would laugh because it does not seem fitting due to my petite size and stature. I thought I might be Anna.   You could spend hours admiring the decadent and elaborate lifestyle of the Crawley family’s estate. I walked away wishing the series still aired for another season.

The Jewish Museum located in Warburg House along Museum Mile showcases art and Cultural Artifacts. My visit brought me to view Modigliani Unmasked, an exhibition featuring the early works of Amedeo Modigliani. The artwork represents those pieces that were collected by Dr. Paul Alexandre. Viewing the drawings, paintings, and sculptures one sees the role that African, Greek and Egyptian art played in inspiring Modigliani’s work.

Often when visiting New York City, I frequent the same restaurants because they are familiar with my dietary restrictions but this trip I decided to be more adventurous.

If vegetarian is your thing, I recommend Candle 79 an upscale restaurant on 79th St. and very close to the Metropolitan Museum of Art. Using organic and locally grown ingredients the restaurant strives to please each patron. The Polenta Fries were wonderful. My main course was a Portabella Mushroom Steak. The wine list consists of organic wines, in keeping with the restaurant’s theme. I enjoyed the Domaine Bousquet Malbec, a lighter yet very drinkable wine from the Uco Valley of Argentina.

A group of travel writers from the International Food Wine Travel Writers Association decided to get together for dinner. We enjoyed a meal at Esca, a Southern Italian restaurant focusing on seafood specialties. Esca means bait in Italian, and you definitely take the bait while dining at this restaurant. The service is excellent, especially with a large group. Most of us ordered pasta. In my case, I opted for gluten-free pasta with lobster. The wine list caters mostly to Italian wines, and we enjoyed a white wine from Sicily and a Sangiovese from Maremma in Tuscany.

As a wine writer, it is always fun to visit a wine bar and be able to enjoy an excellent selection of wines by the glass. My drink of choice was a Cabernet Franc, Domaine Jaulin-Plaisantin, Les Hauts & Les Bas, Chinon, France. The wine grows on you while savoring the herbal flavors that characterize Cabernet France and enhanced by some hints of baking spices, which made this wine inviting. Accompanying the wine, I enjoyed a Frisée Salad with Pears, Garlic Shrimp Skewers and Spiced Lamb Skewers. The Ardesia Wine Bar had a cozy atmosphere yet was hopping on my Friday night visit.

Many hotels can be very pricey in New York City. Currently, there is a trend for moderate accommodations at reasonable prices. These hotels have a European flair in both style and sizing of the rooms. One hotel that opened about six months ago is the Moxy Times Square, a Marriott Hotel that is both hip yet comfortable. Think Ikea meets minimalist. The hotel started as a hostel or boarding house for men. It later became an office building.

Today, the hotel features 612 rooms. The beds are very comfortable, and with the noise of New York City in the background, I got a good nights sleep. Convenience for the traveler is quite apparent. It could be seen in the hotel’s bar where there is an adjacent area with a microwave and food to grab if you are on the go. The stash room is another feature more hotels need to offer to their guests. At the Moxy, there is a Stash room on every floor, and if you need extra towels, pillows, soap, hangers, etc., instead of calling room service and waiting forever for housekeeping to arrive, you can go to the Stash Room and get what you need.

Many sites I visited were made possible through CityPASS. The pass enabled me to enter quickly many New York City attractions without hassle.

There is always something exciting and interesting to do when visiting New York City especially when it comes to the arts and theater. Visiting New York is one place that I never get tired of because I always find something new to experience.

Note: Common to the travel industry, this writer was hosted by many of the museums visited. While it has not influenced this review, the writer believes in full disclosure.