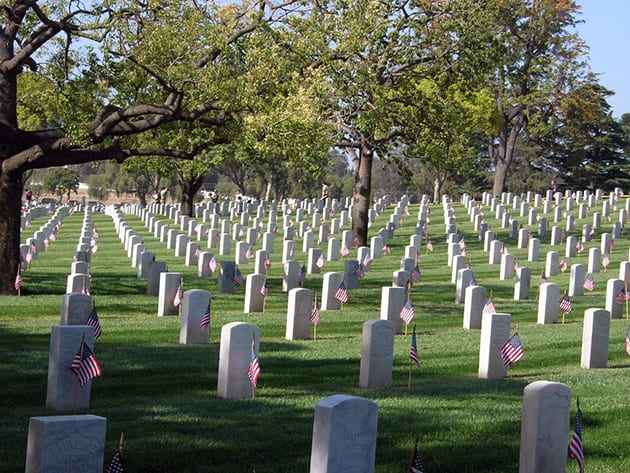 After discovering information about these two dogs, I wandered over to the cemetery to see for myself the exact location. Unfortunately, they both lie in unmarked graves. Bonus resides adjacent to his handler, Charles E Temple, an ensign in the Navy Reserves. Blackout occupies an area near the grave of George Lewis Oshier, a Navy cook and Marine Corps sergeant.  Interesting enough they both are buried relatively close to one another on the western side of the cemetery.

The grave of Charles E Temple piqued my curiosity because of a green unlabeled plaque above the human grave marker.  Perhaps at one time, this was the headstone for Bonus that now appears empty and damaged. One can only wonder.

The retired Veterans dearly loved Bonus, an 11-year-old Husky, the adopted pet of the residents in the soldiers’ home. Although Bonus was denied access to the cemetery because he had bitten two of the guards he was eventually buried under a pepper tree on May 3, 1943, on the Sepulveda side of the cemetery. Leo J. Britt made the burial possible, and he placed Bonus’ collar on the coffin, along with a bag of the dog’s favorite treats and the robe his used on cold nights.

Blackout, a Doberman Pinscher, on the other hand, was a war dog wounded in the Pacific during World War II and came home with honors. Blackout’s interment occurred on May 12, 1945

Today, the cemetery no longer permits the burial of a canine war hero.

Each year on Saturday before Memorial Day 5,000 plus Boy and Girl Scouts will salute each grave and place American flags on every one of the 90,000 resting places of those veterans who died while serving in the United States Armed Forces, going back to the Civil War.  The flags remain in place until Monday after the conclusion of the cemetery’s yearly Memorial Day event.

The cemetery welcomes canine lovers wishing to pay tribute to our local war dogs this Memorial Day weekend.  In addition, take time during the Memorial Day weekend to visit the solemn beauty of the National Cemetery adorned with flags on every single grave. Bonus is located in Section 101, Grave 1; Row A while Blackout resides in Section 99, Grave 2, Row A.