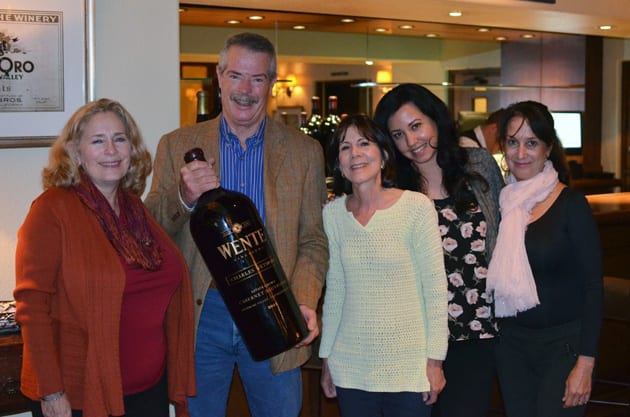 When it comes to California winemaking, two Livermore wineries played vital roles in the history of wine for the Golden State, Concannon and Wente. Both represent the foundation and backbone of two varietals, Cabernet Sauvignon for Concannon and Chardonnay for Wente. For this article, I will be discussing Wente Vineyards.

Enjoying dinner with Phil Wente enhanced the ambiance of the winery and its heritage. Sharing the story of his family’s pioneering accomplishments through five generations sets the perspective for any visit to Livermore Wine Country. From establishing its presence in the Livermore Valley, to developing the Wente Chardonnay Clone in California and putting the Arroyo Seco in Monterey on the map, the Wente family has made a huge impact on the California wine industry.

Before getting into the history of Wente, one must understand that both Concannon and Wente were not the first wineries in the Livermore Valley. Charles Wetmore, who was the Secretary of the CA Viticultural Commission, established the first winery in Livermore, Cresta Blanca Vineyards. In 1889, Wetmore’s dry white wine brought attention to California as a wine-producing region when it won the Grand Prix at the International Paris Exposition.

For Wente, it began when C.H. Wente purchased 47 acres of land in the Livermore Valley in 1883. Today Wente farms around 3000 acres of vineyards. In 1912 Ernest Wente developed the Wente Clone when he took cuttings from the University of Montpellier viticultural nursery in France and brought them back to California. The Wente Clone is one of the principle clones for Chardonnay used throughout California. Second generation Herman Wente in 1933 was the first to label wine as a varietal. It started with Sauvignon Blanc, Chardonnay, and Semillon.

By 1884 Louis Mel purchased an estate in Livermore where he established a winery using cuttings he brought back from Château d’Yquem and Château Margaux. Ernest Wente bought this estate in 1933 and today descendants of those original vines prosper. In 1990, Phil Wente and Sergio Traverso revived that winery into Murrieta’s Well, a name that pays tribute to the properties history.

Unfortunately, Prohibition was not as kind to the Cresta Blanca Vineyards. This winery closed and although Wetmore’s brother reopened the winery, it did not thrive. During this time the land lay dormant until 1981 when the Wente’s purchased the property with its historical landmark. Today, the grapes from this location produce wines under Wente’s Charles Wetmore label.

The Wente’s were instrumental in getting the Livermore AVA established in 1982. They were also involved with the creation of the California Wine Institute.

Currently, Wente is Certified Sustainable and utilizes green practices in the vineyard, the winery, their restaurant, and in raising of cattle as well as in the community. These principles are especially evident in the garden where a good portion of the produce grows for use in the restaurant.

Wente is not just about wine; it is a unique winery experience. Stepping into the original cellar, visiting the gardens where Diane, the garden lady, has been nurturing the vegetable, herbs, and fruits for almost two decades. Finally, the restaurant, which many consider one of the best in Livermore. There are also the concerts offered during the summer months.

During my visit to Wente, the following wines sampled left an impression:

2016 Murrieta’s Well The Whip: A blend of Sauvignon Blanc, Semillon, Chardonnay, Viognier, and Muscat creates a very aromatic wine with bright flavors and a crisp finish.

2016 Morning Fog Chardonnay: This wine ferments in 50% stainless steel with no malolactic fermentation while the other 50% ferments with malolactic in used barrels. Flavors of apples permeate the wine.

2015 Orange Muscat: We ended our dinner with this aromatically fragrant wine that displays flavors of honey and apricots.

My visit also gave me the opportunity to sample the GSM, Zinfandel and the Chardonnay and Pinot Noir from the Nth line.

This year Wente celebrates 135 years as the oldest continuously operated family winery in the United States. Karl Wente sums up the philosophy of Wente, “If you take care of the earth, the earth will take care of you.”  Wente Vineyards achieves that goal.

Note: Common to the wine industry, this writer was hosted to this dinner and tasting. While it has not influenced this review, the writer believes in full disclosure.