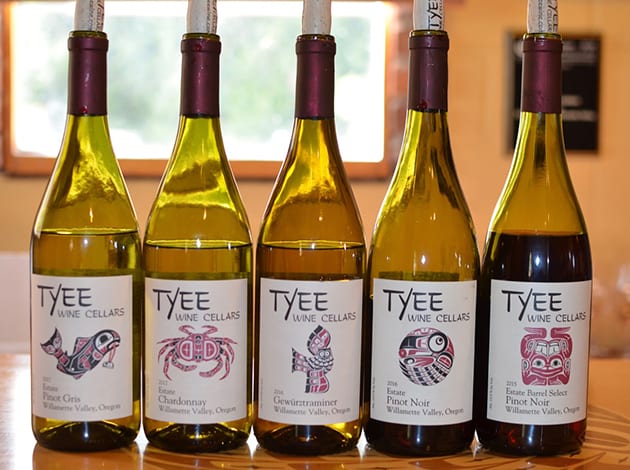 From a dairy farm to growing grapes, Tyee Wine Cellars is a family-owned Willamette Valley winery.  Now in its 5th generation with Merrilee Buchanan Benson and her husband Brian Benson taking the lead on this boutique Oregon winery that produces 2000 cases of wine a year.

Off the beaten path about 20 minutes from Corvallis, you will find the Tyee Wine Cellars set in a bucolic setting ingratiates a day of wine tasting.

The Buchanan Family founded the farm in the Willamette Valley in the 1850s. It prospered as an all-purpose farm. The third generation raised Jersey cows and ran a dairy. The tasting room now sits in what was the milking parlor. The third generation planted the grapes in 1974 and established their Willamette Valley winery in 1985. At that time, they also raised sheep and harvested hazelnuts.

Today, 15 acres are planted with vines, of which 10 acres consist of different clones of Pinot Noir, including Pommard, 115, 777, and 114. In addition, Pinot Gris, Chardonnay, and Gewurztraminer grapes grow.  Most of the vines are dry-farmed, and Tyee utilizes sustainable practices in both the vineyard and the winery.

Tyee in Native American means the chief or boss. It also refers to a type of Salmon, and as it turns out, Tyee Wine Cellars is Certified Salmon-Safe. There is a saying that aptly describes the Buchanan’s philosophy, “Salmon take care of the people, and people take care of the salmon.” This mantra is the approach to the stewardship of the Buchanan family farm. They have created habitat on the additional acreage of the farm, and that habitat also takes care of the family.

All the wines labels are embellished with a Native American image representing an animal, fish, or bird and come from the Chinook language. Artist James Jordan designed the labels that rival his Native American roots.

Pinot Gris 2017: A bright Alsatian styled wine with nice acidity, aromas of pear, and flavors of citrus and pear.

Chardonnay 2017: An unoaked Chardonnay with flavors of apple and pear. This wine was a favorite at Tyee.

Estate Barrel Select Pinot Noir 2015. This Pinot Noir showcases more depth due to the age of the vines than the Estate Pinot Noir.

If you are visiting Corvallis and have a hankering for a Willamette Valley winery wine tasting, Tyee Wine Cellars is ideally located to stop in and sip some excellent wine.