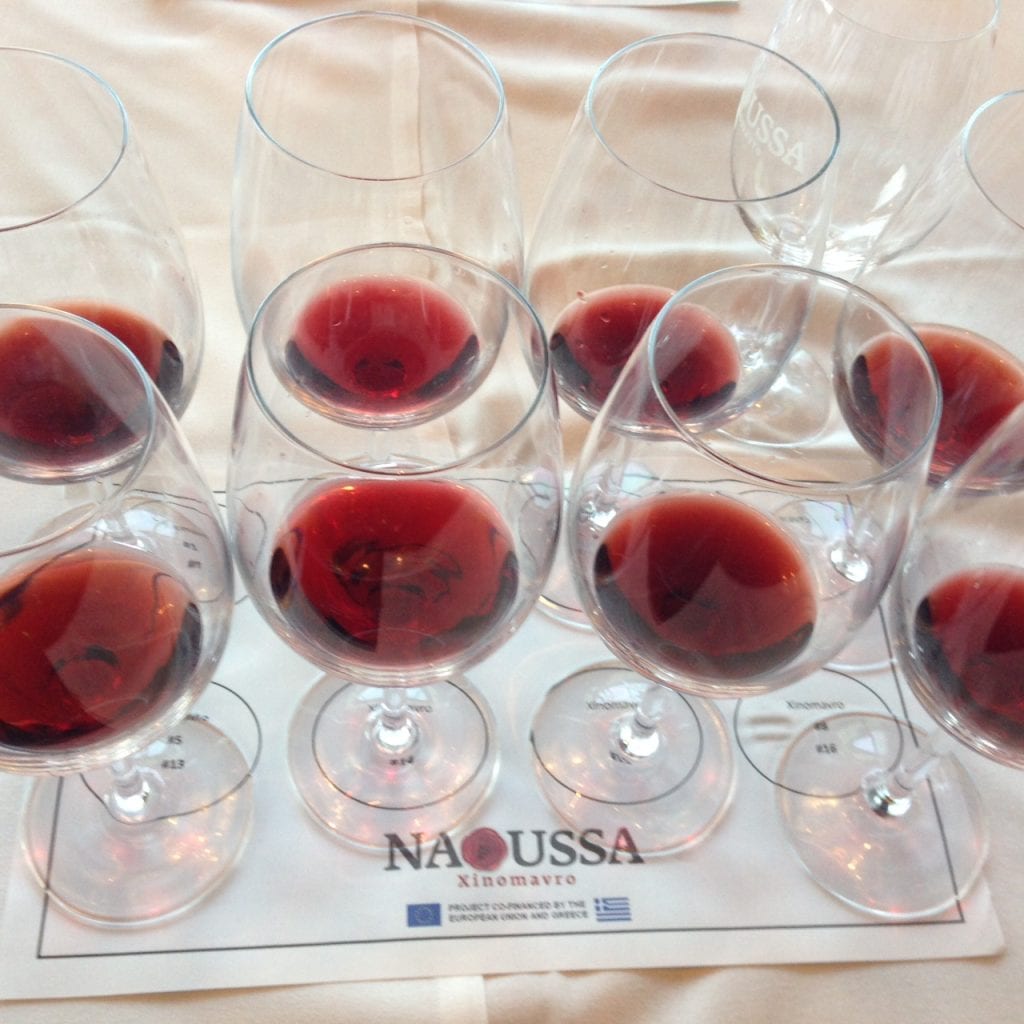 Greece is probably one of the oldest wine regions in the world.  In biblical times the Greeks brought the first vines to Europe.  Today this country lays claim to over 300 varietals.  One of those varieties is the Xinomavro grape whose origins are from Western Macedonia, Greece in the appellation known as Naoussa.

Xinomavro means acid black, and this dark black skin red grape is characterized as being very acidic and tannic.  The wine produced is typically very dry.  The range of styles throughout the Naoussa region enhances the grape and its quality.  Xinomavro might be described as Pinot Noir meets Nebbiolo.  Certain flavors clearly identify this grape.  They are figs, olives, and dried Tomato.  The color of the wine is typically garnet to deep red.

The Naoussa wine region lies in a valley along the foothills of the Mount Vermion.   Encompassing a total of 15 miles and located 75 miles from the sea.  The terroir differs from the northern to southern portions of Naoussa; therefore, one will find each wineries wine characterized by subtle differences.

The region is the first PDO, Protected Designation of Origin in Greece. Naoussa received this designation in 1971. This designation means that the wines produced from the Xinomavro grape grows in a certain way and the vines bear a particular yield. Under the guidelines of the PDO if a label designates the wine as Naoussa Xinomavro, which ages for 12 months.  A label with Naoussa Xinomavro reserve means it ages for 24 months. If a Naoussa Xinomavro specifies Grande Reserve, it ages at least 48 months.

History shows that phylloxera plagued this wine-growing region in the 1930s. In the 1960s and 1970s, the area was replanted with Xinomavro. They chose the Xinomavro grape because of its resistant to diseases.

There are about 20 wineries in the region, and about 12 belong to a group called Wines of Naoussa.  Many of the wineries are very established with incredible family ties.  It is a family affair.  Many have been growing grapes for several decades.  One will discover that the latest generation is a group of winemakers between 30 and 40.  Winemaking is handed down from father to son.

In March I got to sample about 12 to 14 wines from the region.  Here are my favorites:

Diamantakos Naoussa 2008 with its light to medium body is very aromatic with florals and also balanced.  You can smell the acidity.  It has a garnet color.  On the palate, one finds Tomato and Fig.

Kelesidis is a small production winery.  The 2006 Merchali is smooth and balanced everyday drinking wine that also has the potential to last 20 years.

Elinos is a family winery now run by a twin brother and sister.  Tasting their wine on two occasions, it shows how it pays to revisit a wine.  My first experience with the Naoussa 2007, I found the wine tighter and with more acidity.  Perhaps the wine needed to air longer.  Tasting the wine a day later, I discovered that this was probably my favorite from Naoussa.  The wine was smooth and balanced and very together showing the best virtues that Xinomavro and the Naoussa region has to offer.  This winery is located in the northern portion of Naoussa.

Chrisohoou is the oldest winery in Naoussa.  The 2008 Estate Chrisohoou was the fullest bodied wine I sampled from the region.  It also exhibited the deepest color and had the most complexity.  The marvelous dark color with rich textures exuded hints of cherry, but at the same time, one perceives the classic tomato flavors that are so apparent in the Xinomavro grape.

Thymiopoulos is a biodynamic winery.  The winery has two labels, one being Young Vines, where the grapes for the wine are from 7 – 10 years old.  The other, the 2012 Young Vines was an unoaked Xinomavro and displayed floral aromas, flavors of raspberry and very balanced.    The Uranos 2011 comes from 42-year old vines. It was very fruity and balanced.

The philosophy of this biodynamic winery and vineyard is not to stress the vine. This practice can be difficult when the grapes grow in very rocky mountainous soils. The winemaker, Apostolos Thimiopoulos explained the significance of the label to me. The circle stands for oxygen, the line equates to the soil, and the wave of the line signifies the water necessary to grow the Xinomavro grape, while the dot represents the light or sun needed to ripen the grape. All these facets play an important part in biodynamic practices.

I sampled three wines from Vaeni and enjoyed all three.  The 2008 Naoussa, although deep red in color, its light texture reveals a very dry wine.  The 2006 Damaskinos is also light, but I found the wine very bright and balanced.  The aging process of this wine is quite interesting.  After 12 months in French Oak barrels, the wine then ages six months in intensely smoked new oak barrels, adding a smoky aroma to the wine. The wine then ages in bottles for six months.  My favorite was the 2006 Naoussa Grande Reserve.  This wine, with its deep red color is a rich, full-bodied wine with complexity and structure.

Estate Foundii has one of the few women winemakers in Naoussa, Georgia Foundi. The Naoussa 2008, aptly named “The Lady from Naoussa” represents Georgia and the wine exhibits more feminine qualities.  The wine is light fruity yet elegant and has the tomato nuances so typical for Xinomavro.

In summarizing, Xinomavro is definitely the grape of Greece and represents what the modern Greek wine scene is all about.  You to can discover the virtues and ingratiate some of the traditions of Greece when you sample the wines of Naoussa. I also found a resemblance to those of the local wineries I have tasted in the South of France.  Although the grape varietals differ, perhaps the Mediterranean culture and similar terroir of both areas influence the winemaking.

Note: Common to the wine industry, this writer was hosted to the wine sampled. While it has not influenced this review, the writer believes in full disclosure