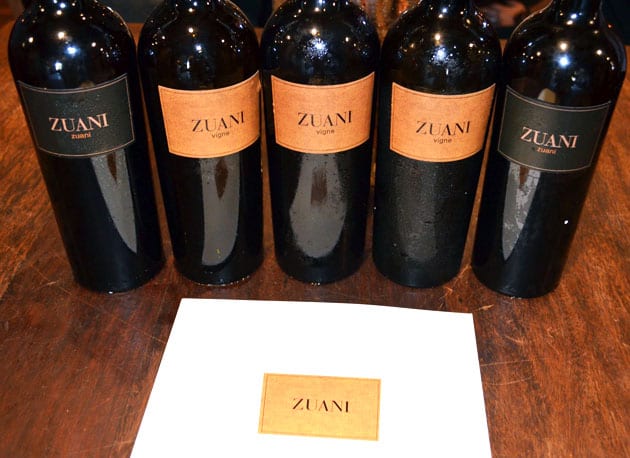 I first learned of Italy’s Collio DOC in 2014 when the president of the Consortium, Robert Princic visited Los Angeles.  Sharing the beauty and wines of this small yet dynamic appellation was exciting, so when the opportunity to meet the owners and sample the wines of  Zuani Vigneti, I was delighted to explore the region further.

The Collio DOC lies in the northeastern portion of Italy between Austria and Slovenia, along the Adriatic Sea.  This small crescent-shaped region is influenced by the warm currents of the sea that lies south and is protected by the cool mountain breezes of the Julian Alps that are situated to the north.

Collio means hills in Italian.  These hills eventually become the slopes of the Alps.  The soil is composed of Ponca, which is stratified Marl and sandstone.  This type of soil gives the wines of this region their minerality and salinity.  Because of the soil composition and the region’s proximity to the Adriatic Sea, the wine delivers an expressed character.

Although the Collio DOC makes both white and red wine, the region is predominately known for its whites.  A grape used quite extensively in Collio DOC is Friulano.  This grape is also known as Sauvignon Vert or Sauvignonasse.  Friulano is not to be confused with Sauvignon Blanc or Gris, which has a different profile with more acidity.  The Fruiliano grape produces lively fruit-driven wines.  Many of the wines have some viscosity with a rich and creamier texture.  The flavor profile is citrus and almond with a hint of minerality.

Friulano is used to make Collio Bianco, a unique blend of the region.  The composition is primarily Fruilano combined with the international varieties of Chardonnay, Sauvignon Blanc, and Pinot Grigio.  Zuani Vigneti is one of the predominant producers of Collio Bianco.  They make two Collio Biancos; Zuani Vigne and Zuani Zuani.  The latter is the Riserva, and the grapes are often picked a couple of weeks later and aged a minimum of 9 months in oak barrels, of which one-third is new, while the Vigne ages in stainless steel for 7 to 8 months.

Zuani is a family-owned winery whose heritage began in the 1800s. Now in its fifth generation with Patrizia Felluga at the helm and her children Antonio Zanon, head of export marketing, and Caterina Zanon, head of hospitality.  The winery is located in the Friuli Venezia Giulia. The vineyard sits in the hills of Giasbana in the municipality of San Floriano del Collio.  One particular hill was called Zuani in ancient times, hence the winery name.

Atypical for tasting white wines is a vertical, but Zuani presented a sampling of three different years of the Zuani Vigne, 2012 through 2014 along with two of the Zuani Riserva, 2012 and 2013.  The vertical tasting showed the longevity and the development of Collio Bianco over time. Although each year’s harvest occurs at different times, 2012 was the driest year, while 2014 was wetter, producing a lower grape yield.  The 2013 presented the most balanced grape-growing year. The Vigne delivered a richer, fuller-bodied wine with more acidity in 2012. In 2013 the Chardonnay seemed to be more apparent, and the acidity seemed mellower.  The 2014 proved to be fresh and fruity.

The Collio Bianco Riserva ages in oak, giving the wine a more viscous quality along with a thicker texture and complexity.

Both the Vigne and Riserva are excellent representations of the quality of white wine produced by Zuani.  If you are a white wine lover and have not been exposed to the Friulano grape or the wines of Collio DOC, I highly recommend seeking out Zuani, as you will be quite impressed.

Note: Common to the wine industry, this writer attended a hosted wine-tasting luncheon. While it has not influenced this review, the writer believes in full disclosure.