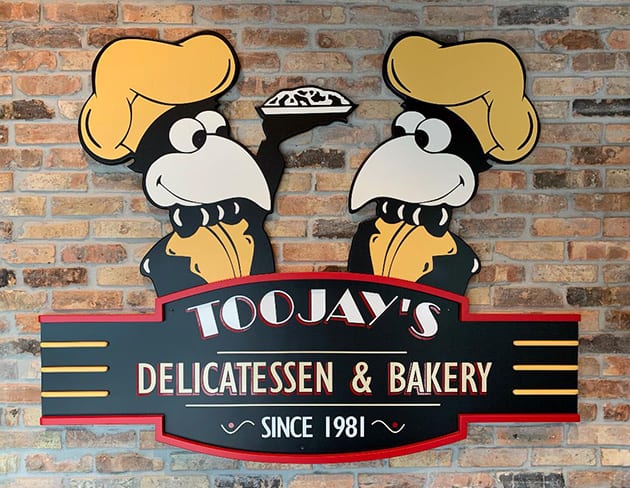 Coming from Los Angeles, the plethora of great delis is a given. In Los Angeles, you can easily find a good deli in just about any neighborhood. And now, Naples can effectively compete.

This was our first foray into a deli after having been in Naples for a few months, and TooJay’s, located at Mercato Plaza in Naples, reminded me of some of my big-city deli experiences not only Los Angeles but of course New York.

TooJay’s Deli has been around since 1981 and now sports 30 restaurants satisfying customers throughout Palm Beach and Broward counties, the Treasure Coast, the West Coast of Florida, the Orlando area and The Villages.

“We are excited to bring Florida’s favorite New York-style deli to Collier County,” said Maxwell Piet, TooJay’s president, and CEO. “We welcome the Naples community to enjoy the flavors of our made-from-scratch food and amazing hospitality at TooJay’s.”

TooJay’s was bustling. Even on a Monday, the restaurant was packed. Cool retro black and white photos are sprinkled throughout the restaurant, giving it that urban flair, which I have missed.

The menu options are extensive, but since we had enjoyed a late breakfast, we opted for the soup and ½ sandwich combination, which was more than enough and a real bargain.

Choose from a nice selection of hefty sized ½ sandwiches, which includes and a brimming bowl of soup along with a pickle and coleslaw. I preferred my bowl of butternut squash to the split pea, although both were good. My friend reveled in her pastrami sandwich, saying it was very lean, tasty, and thinly cut. We both also thought the coleslaw was dynamite.

Although we were stuffed, we couldn’t bypass a piece of pie. We really had to exercise a bit of restraint when the key lime came. We attempted to push it aside but then enjoyed a few more bites before we headed out the door, the lonely piece of pie still taunting us from the table.

Best Dessert from The Palm Beach Post, the 2018 Best of the Menu Tracker for its Nova Latkes from Nation’s Restaurant News, the 2018 Restaurant Neighbor Award as a State Winner from the National Restaurant Association Educational Foundation for its work with Feeding Florida, the 2018 and 2017 Dining Award for Best Deli from Orlando Magazine and two 2017 Foodie Awards for Best Deli and Best Take-Out from the Orlando Sentinel.

For more information about TooJay’s, visit TooJays.com. Follow TooJay’s at twitter.com/therealTooJays and instagram.com/toojaysdeli or visit the Facebook fan page, which has over 93 thousand fans, and become a fan at facebook.com/TooJaysDeli.

Mary McGrath is a freelance writer and photographer living in Los Angeles and Naples, FL. Her work has appeared in several publications including Newsweek, Good Housekeeping, L.A. Times, Chicken Soup for the Soul, and many other publications.